As many of you surely have observed, this summer has been a bit slow on the updates as Rachel prepares for the bar exam and we get organized for our new careers . . . as General Contractors!   Just a few weeks in, and we can see why these guys get paid the big bucks to coordinate construction projects.  In light of our relative ignorance of the construction process, things have been moving slow, but last week, we made progress by leaps and bounds.  Behold: 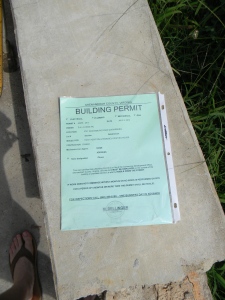 Our building permit for the Little House!!

After laboring over the volume of information required a few weeks ago, we were surprised at how fast the actual permit was issued.  And so, we’re off!

The first phase of the rehabilitation of the Little House was to prepare new footers inside the original structure, and dig the foundation for the addition.  Here is the general plan: 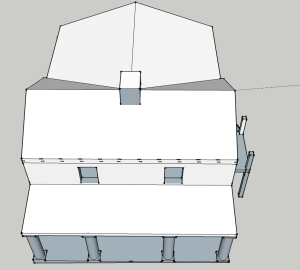 The layout of the downstairs preserves the kitchen (top left) and living room (top right) as they were in the existing Little House.  In the picture below the large white rectangle is actually the roof of the porch.  In the addition to the Little House,   there is an office (back left),  and mud room/powder room/utility closet (back right).

Upstairs, the two bedrooms of the original structure remain unchanged, with the very narrow “existing” staircase to the far right (more on this below).  The upstairs portion of the addition includes a central jack-and-jill bathroom flanked on either side by dressing rooms, which address the complete lack of closets in the original house.  We’re also adding back a walk out deck, as the left bedroom currently has a door to nowhere.  We are pretty sure that there would have been a deck structure in the past, but we can find no evidence of the old dimensions and we know there has been no exterior structure on that part of the building since at least the 1940s. 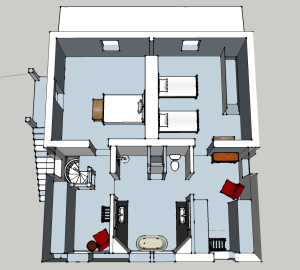 Now that you have context for our dream Little House, here is the dirty truth.  Digging foundations is for the dogs.  What awful, terrible work to embark on in early July.  Oh well, at least it is good exercise!  For the existing structure, the original floor beams were 4×16 timbers that were actually installed with the brick walls, see our last post, in particular, this picture. in the image below, you can see that we have removed those beams and have dug a foundation trench 24 inches below the bottom of those beams.  Our new floor support structure will be installed on the new foundations, and will not rely on the brick structure for support at all. 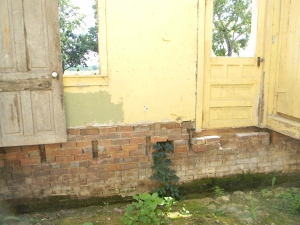 During this final demo project, we had to remove the floor supports, but also needed to leave the original stairs in tact so they can be repaired.  If we were to demo them completely, we would likely have to install a new set of stairs to code, which would destroy the historic integrity of this charming-yet-narrow, turning staircase.  Lucky for us, it seems that the stairs were entirely floating on their upper supports, and we were able to just remove the floors from under them!

Here you can see the stairs curving upward on the right side of the door that leads into the little house’s living room.  You can also see just how deep our brick foundations go.  In that image, the door is about three feet above the dirt floor of the crawl space of the living room of the Little House.  Another cool feature of the little house are these wrought-iron hinges, that still supported the door into the little house!  The hinge has a large metal spike that was simply pounded into the door frame, and the bottom decorative leaf has one nail. 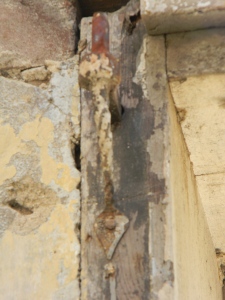 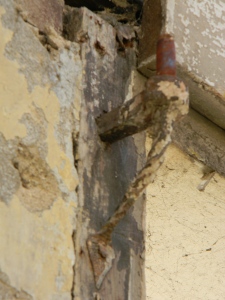 Below, you can see the thickness of the original door frame.  Also, to the immediate left of the doorframe, you can see a wooden block in the space where an interior brick should be.  As we demoed the Little House, we realized that in order to attach anything to the walls (in this case, baseboard), the builders left voids in the course of brick and then mortised in wood blocks.  Once the blocks were installed, they could then nail whatever they needed into the wood backing block, rather than trying to anchor anything into the brick.

Outside, we turned to the pros, and had a large foundation dug for the addition.  It is hard to tell from these pictures, but we went down more than four feet! 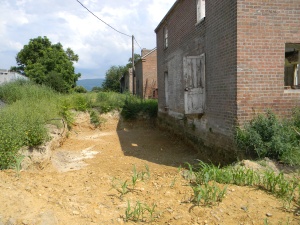 The next step is to form the foundations and have them poured in concrete, then we will back fill the area with dirt and pour a concrete pad for the floor of our crawl space.  Once the concrete work is complete, the masons will install a few courses of cinder block to bring our walls up to grade, and we will frame our structure from there.  Progress!

Speaking of progress, the work on the main house right now is a bit in the conceptual/intangible phase, as we have been working with our (highly recommended!) draftsman, Gary, of Drafting Services in Harrisonburg, to bring our vision of the addition to the main house to life.  Below, a teaser:

Bonus points to whoever can guess our inspiration for the addition structure in the comments!