So you know how sometimes you start a small project, say…stopping that leak in the cabinet underneath the sink, and low and behold it is time to replace the plumbing in your entire house?  Enter: Edgehill Windows. 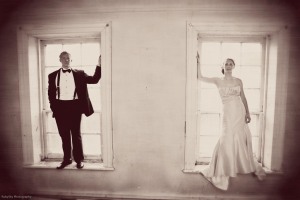 After some assessment it looks like I have stockpiled material for several (long overdue) posts, but here is how it all began.

About a month and a half ago I decided that I needed a place for various projects as the winter weather approached.  Luckily, Edgehill was constructed as a working plantation home, and, as such, comes complete with an external office, the South wing, that is only accessible from the outside. 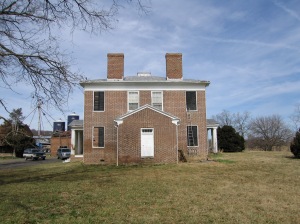 In the traditional separation of spaces that would be expected on plantations of the 1700s and 1800s, the farm office was an isolated room so that the business workings of the farm and all of the range of clientele did not enter the family’s living areas to conduct business.  No horse trading in the living room, please.  In thinking about our plans for the room, Rachel and I have envisioned a home office that is insulated from the chaos our friends with children tell us we are heading for just a few years down the road.  At present, however, the room is in pretty rough shape (but what around here isn’t!).

I decided that the first step for the South wing was to stop any further damage (also a theme around here).  I had an obvious starting point: 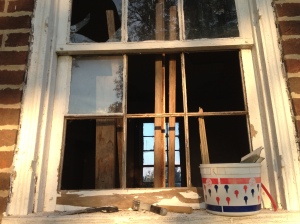 No/broken windows = water damage, insect infestation, dirt and debris, increased thermal damage from freeze/thaw cycles, basically nature’s first opening to reclaim the space.  So I said to myself, no big deal, I’ll just get some glass cut and patch that bad boy right up.  What a fool I was.

After getting some window panes ordered from B & L Glass in Harrisonburg (those guys are great, and incredibly fast!), I got on my ladder and started to remove the old pieces of glass.  Unfortunately, the wood started coming off as well.  I quickly realized that I wasn’t doing a ton of good in replacing just the broken panes when the bottom of the lower sash had some considerable rot damage, and paint was peeling everywhere.  What to do?  Google, obviously.

I put down the scraper and retreated to the computer to get some advice from the experts on a prognosis for my windows.  From my hours of blog reading I came up with the general spectrum of my options.

1) New Windows! Maybe tilt-outs! Vinyl that never needs painting!  Insulated Low-E Glass!  Thanks Google advertisers, but with our goal of saving as many of the historic features of the home as possible, it seems almost sacrilegious to think of removing our 170 year old (mostly) solid-wood craftsmanship.

2)  A quick patch.  Replace the broken panes only, but expect to be back on the ladder as the glazing compound from the other window panes sheds down in a rain of crap every time window is opened, and who knows, maybe the remaining old glass itself will fall out too.

3)  Complete Restoration.  Can you see the aforementioned plumber planning his next vacation?  A quick search revealed that this option is either: Incredibly expensive (think removing all windows, shipping them off to a professional shop, waiting several months, and having them returned and installed) or a DIY project on steroids.  Being a broke public servant with a wife in graduate school, you can see where this is headed.  I knew that with the winter approaching I would need a job that I could work on in the evenings while Rachel is grinding out her last year at law school, and the more I researched the process the more it seemed that this task would certainly fit the bill.

I decided I needed a plan of attack.  My research led me to these general steps:

1) Remove the windows from the frame entirely (full restoration of a window still in the frame is nigh-on-impossible).

2) Carefully remove the old glass, salvaging as many of the wavy old panes as possible.

4) Remove all of the old paint and window glazing putty from the de-glassed window sashes.

5) Using wood epoxy liquid and compound, restore the integrity to any damaged/soft/rotting wood.

6)  Sand the cleaned and repaired sashes and dry-fit the glass.

7) Prime the sashes with good quality oil based primer.

OH HOLY CRAP WHAT HAVE I GOTTEN MYSELF INTO?  Well, you are probably also thinking, what have you gotten yourselves into, this post is going to be days long!  In order to not short change or bore to death, the remainder of this post will be dedicated to Steps 1-3.  It looks like steps 4-6 will be getting their own post, 7 will have its own post, and 8-10 will close it out.  I told you I was sitting on a stock pile!

I got a pretty hilarious comment when I started with step 1.  My brother Daniel had been around the farm a couple of days and knew I had started working on the windows of the South wing, and then one day he drove by and the window sashes were just gone.  He became concerned that I had just lost patience and had a rage moment.  Rather, I had just made the determination that I would be tacking the windows on my own terms, and not on a ladder: 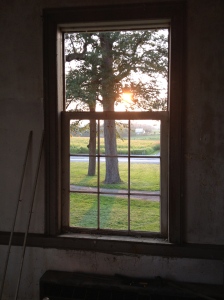 Leaning against the wall in the picture above are the two pieces of trim that hold the bottom pane in the window frame, and form half of the track that the window slides up along.  Luckily, the windows in the house are not weighted, and thus I had no complicated ropes and pulleys to deal with.  The top window sash just sat nestled into its frame on this ledge (it didn’t lower, unlike the windows in the a main house): 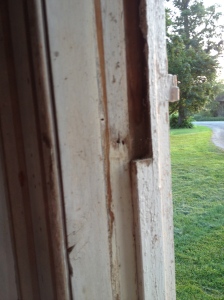 Once the windows were out and I was off the ladder, the project immediately felt more manageable.  Now to remove the glass.   I started with just a putty knife and determination and wound up with shards of wavy glass and a horrible temper.  Back to google.  My options turned out to be chemicals, heat gun, or broken glass.  I chose heat gun.  A quick run the the hardware store and I returned with what seemed to be a souped-up hair dryer, the 1200 watt Wagner: 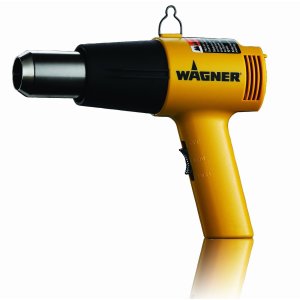 I chose this bad boy because it was pretty cheap ($25-ish), had decent online reviews, and because it comes with two heat settings.  I had read online that you can’t heat the glass up too much, or it cracks.  I can now tell you as a primary source that it certainly does.  After trying a few tricks, I found that if I held a wide metal blade putty knife as a shield over the glass where I was heating the putty the glass stayed cool and the heat was directed right where I wanted it (Sorry no pic here, not enough hands!). I also found that those little metal points that hold the window glass during glazing are a blessing in that they can save a pane from falling out when the putty has failed, but if the putty is still good those little suckers are hard to find and if you press on them the wrong way you will crack your glass.  Moral of this story: Go slow: 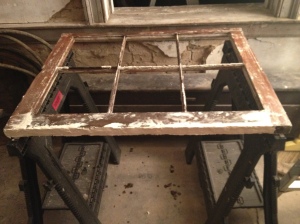 Also, a word to the wise, you never know what is in that old putty or paint on the putty, which you are essentially vaporizing; I donned a respirator for this job, and for several others in the window escapade: 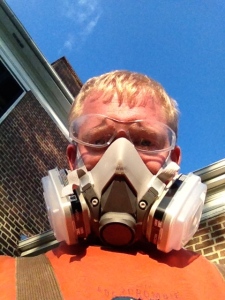 Last trick.  I realized that I didn’t necessarily have to get all the putty off the window glass with the heat gun to remove the glass from the sash.  This is good news as it means less chance of breakage, but it also means you have windows with glazing compound stuck all over them.  I did some research and decided to try an experiment.  I went to Lowes and picked up a gallon of acetone (nail polish remover) and soaked the dirty windows in pure acetone (careful here, acetone can be nasty on skin, its fumes are terrible, it is ridiculously flammable, and it is HORRIBLE on some kinds of plastics as will be part of a later post.)  This is where having a PhD candidate in Materials Engineering for a brother comes in handy.  Gio kindly did a little chem and told me that acetone would not react with Aluminum.  Thus, I went to food lion and got the largest cheap foil pan I could find: 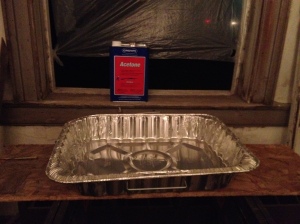 As acetone is also highly evaporative, I decided to use saran wrap to mitigate my losses: 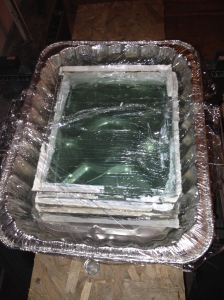 Careful though!  Any time the saran wrap hit the acetone it completely melted away.  Note all of the glazing compound above?  Now see: 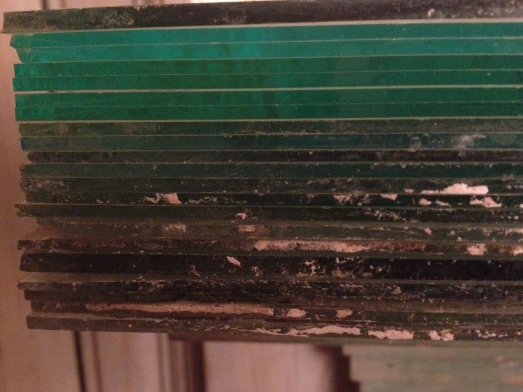 Amazing! (The green glass in this picture is new, so you can also get an idea of my range of thickness in the old glass, pretty interesting).  I still have a little to scrape off the edges, but it came right off.  The scientist in me wants to tell you that I tried this with two time periods, about 4 hours of soaking and 24 hours of soaking.  Four hours didn’t cut it, but 24 hours worked magic, I hardly had to scrape at all!  And the acetone loosened EVERYTHING, not just the glazing compound.  Last, I found that the acetone didn’t lose its efficacy through multiple uses, I was able to clean several batches of window glass with one pour of acetone; just be diligent about keeping the foil covered so you don’t lose much to evaporation.

That whole process only took a week!…er…this is going to be long process.  Up next:  More experiments! Paint removal and wood restoration take center stage.   As always, if you have any advice, please let us know!